Ice Cream In The Old Days – A U.S. Original

Ice Cream In The Old Days

Ice cream in the old days, was seen in the newspaper advertisements, but was usually only available  at the local drugstore or soda fountain. People still made ice cream at home but because there were no home freezers, it was only made in small batches and consumed right away. It wasn’t until the 1940’s when home freezer units became available. Then it began to be sold in stores so that people could enjoy store brought ice cream at home.

In this post we will look at various advertisements for ice cream as seen by readers of the newspapers of the early 1900’s. You will find ice cream advertising from The Velvet Kind, Supplee, Colonial, Garrison, Model and the fathers of American ice cream, Jacob Fussell. Browse these early ice cream adverts as you read about the history of ice cream that was first seen in the Charlevoix County Herald in 1914. The bold subtitles are my own.

A French cook, Clermont, residing in London, gave instructions for making sweet ices in a book published in 1776. English cook books one hundred and fifty years old give recipes for cream ices in which cream and milk, sugar, eggs, arrowroot or flour and flavoring were used. Recipes have always varied according to the whim or desire of the maker. It is a question whether Germany or England first made ice cream, but it is generally conceded that the Germans led the English in making fancy molded creams.

We deduce from the foregoing bits of narrative that ice cream was not apparently discovered (but rather was the result of a slow process of evolution or development, which was taking place in different localities at about the same time. History states that ice cream was first sold in New York by a Mr. Hall, at 75 Chatham street, now Park Row. Ice cream is mentioned in an account of a ball given by a Mrs. Johnson December 12, 1789, and was introduced to the city of Washington by Mrs. Alexander Hamilton at a dinner at which President Washington was present. She had be come familiar with the dish in New York. The first advertisement of ice cream appeared in a New York paper, the ‘Post Boy,’ dated June 8, 1786, and reads as follows: ‘Ladies and gentlemen may be supplied with ice cream every day at the City Tavern by their humble servant, Joseph Crowe. A negro, one Jackson, who had worked at the White House in Washington after Mrs. Hamilton introduced ice cream to President Washington learned the recipe and started a confectionery. He sold his cream readily at one dollar per quart. Others imitated him, but Jackson held his custom and prospered by making the best goods and died wealthy.

Jacob Fussell is admitted to be the father of the wholesale ice cream business. The year 1851 found him in the milk business at Baltimore. His supply of milk came into Baltimore on the Northern Central Rail way from York county, Pa. A few of his customers wanted cream, and finding that satisfactory results were not obtained by ordering cream intermittently to supply an unsteady demand, he made arrangements for a regular shipment. Here again a difficulty presented itself, for at times he found his stock of cream accumulating, which must be disposed of in the best way possible.

To utilize this surplus he conceived the idea of making ice cream, the retail price of which at this time by the few confectioner who sold it was sixty cents per quart. The idea proved an inspiration, for the ice cream business soon overshadowed the milk business, which was in time disposed of. Mr. Fussell believed in the value of printer’s ink and advertised his new business, and then, as now, intelligent advertising paid. Devoting his entire attention to the ice cream business, he prospered in it, and built up a large business, the success of which has continued through three generations to the present day.

In 1852 and 1853 he tried out a scheme for making his ice cream at the source of supply of his raw material, rather than at the distributing point, but it did not prove successful, for while the ice cream was actually produced cheaper in the country, the fact that his own attention was divided between the two establishments, and that the stock at the selling end could not be readily controlled, counteracted the lesser manufacturing cost, and the result was that the project was abandoned and not repeated. In 1856 the Baltimore business was left with a partner and a factory was opened in Washington, D. C. In 1862 Boston was added to the chain of plants.

Here a large exporting firm, who had made considerable money shipping ice to London, India and Brazil, saw a new outlet for ice in the ice cream business. They attempted to induce Mr. Fussel to go to Brazil and start a factory there, and offered to back him with the necessary capital if he wanted it, but he was not interested. Failing to get him to send one of his men over, they arranged for one of their own men to learn the art of making ice cream, and paid a modest $500 for the formula. How the South American venture fared is not recorded. In 1864 the New York house of Fussell was started and continued with the usual success. Here the prevailing price among confectioners was $1.25 per quart. A Mr. (Perry) Brazelton, of Mount Pleasant, Iowa, a friend of Mr. Fussell, using his fortune in the panic of 1857, came to Washington and learned the ice cream business. He went back west and opened a factory in St. Louis, later going to Cincinnati and Chicago.

American enterprise was not long in taking up the new industry, and the growth of the business commenced. However, the real development, the day of large figures in the business, had its beginning not over fifteen years ago. The brine of refrigerating system of freezing ice cream has been efficiently applied only within the past five years, and has now only fairly begun.

The first real progress toward artificial refrigeration is said to have been made by a German in 1867, and it was then used only in breweries, and to a very limited extent. Ice making by artificial means came next. The use of refrigerating processes for making ice cream was probably begun in a way by chance, for large ice manufacturing establishments put on an ice cream department to utilize the broken or waste ice, and the possibility of applying mechanical refrigeration to the making of ice cream was no doubt thus discovered.

Ice cream is in high favor in England, where the climate favors its use the year through. And it is used by nearly all steamship lines, especially those making long trips in warm climates. The passengers, who do not relish the indifferent quality of most foreign made goods, demand American ice cream. Every express steamer of the North German Lloyd line leaves New York with not only a supply to care for the wants of its own passengers, but enough to furnish the Japanese, Chinese and Australian service of the company. For the far eastern service the cream is carried in refrigerated compartments to Bremerhaven and there transferred to ships sailing for ports in India, China, Japan and Australia.

It does not seem proper to close this article without some allusion to our friend of the lawn party, ice cream wagons, and county fair the ice cream cone. I have heard that it was introduced in this country at the St. Louis exposition. I have found directions for preparing a refreshment called “fried ice cream,” sometimes known as “Alaska pie” or “Alaska fritters.” The method is, briefly, to dip a cube of hard ice cream into a thin fritter batter and then to plunge it into very hot lard or olive oil. The pastry forms a good protector from the heat and hardens so quickly that the cream is not softened in the least. Another more elaborate form is said to be served in certain New York cafes today. The fried ice cream was introduced at the World’s Fair in Chicago in 1893. It occurred to me that these freak varieties may have suggested the idea of the ice cream sandwich and ice cream cone. Whatever the origin, we will have to admit that the cone has sold many a gallon of ice cream and made many a dollar for those engaged in the business. 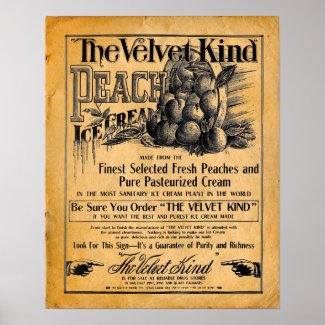