The Bohn Syphon Refrigerator appeared in ads across the US extensively from 1909 – 1921. Little is available online about the Bohn Syphon except somewhere along the line , the Syphon was dropped and the business went by Bohn Refrigeration. They know make commercial equipment under the Heatcraft name.

Here are some of the early ads –

This ad featured the text – BOHN SYPHON SYSTEM – This same system can be secured for the perfect preservation of food in every home in Bohn Syphon Refrigerators. They have an improved system of ventilation that makes odors impossible. They are always dry as a bone. Matches can be keptdry in them indefinitely. They are kept scrupulously clean by an occasional wiping with a wet cloth.

The three points of first importance in every refrigerator are the insulation, the lining and the circulation of air. The best looking refrigerator is a poor purchase if the Genuine White Porcelain Enamel — Not Paint This lining is non-porous and non-absorbent. Wiping with a moist cloth keeps it immaculately sweet and clean. Other so-called enamel which is merely enamel paint has not the glossy white surface of Genuine Porcelain Enamel and will in a short time discolor, crack and peel off, the poisonous flakes falling into the provisions. 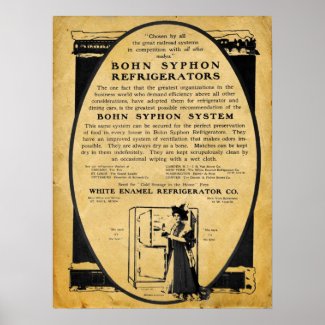