In our look at vintage coffee ads, we will continue with a look at advertisements that appeared in the early U.S. newspapers from 1900 – 1915. It was at this time we start to see more visual ads that started to appeal to the consumers tastes and pocketbook. They advertise richness of taste, roasting qualities and cost per cup. Most of these advertisements may be ones you may never have heard of.

Lion Coffee – At the turn of the century, there was a brand called Lion Coffee which appeared all over the country. I had not seen these claims from other coffee ads, but in the ad on the right, Lion Coffee made this claim. “Lion Coffee is not glazed, coated or otherwise treated with egg mixtures, chemical, glue etc., etc. Lion Coffee is pure coffee.

Lion Coffee ads were one of the largest print ad campaigns of its day and dominated the newspapers from the late 1800’s until very early 1900’s. There is a Lion Coffee company today owned by Delano West Ltd, in Hawaii that purchased the rights to the earlier coffee in 1980. I’m not sure about what happened from those years from around 1905 until 1980 but they still use the lion mascot.

Arbuckles Coffee – You can make a better cup of coffee and more of it from a pound of Arbuckles Roasted Coffee as you can from any of its many cheap imitations. No other coffee makes so many cupfuls of good coffee to the pound. A cent was never better invested than the extra cent you pay extra to get the genuine Arbuckles Coffee.

A list or useful articles to which the purchaser is entitled is found In every package. Save the signatures. ARBUCKLE BROS.. Notion Dept., New York

The text in the ad above reads – Look at a kernel of coffee as it comes from the roaster and before it is ground. Note that the chaff (to be found in the little groove and on the inside of the coffee berry) is apart of the parchment envelope in which the coffee grows. This envelope has none of the quality that gives coffee its flavor in the cup, but instead, has the unpleasant, bitter taste which, as described by the medical Authorities, is the basis tor the objections which some people find to coffee drinking.

Apparently this chaff is light in weight and of little consequence, but, when removed from the bean, five pounds of coffee will yield a double handful and the flavor of the infusion of this chaff when boiled alone closely resembles that of oak leaves. It is certainly reasonable to believe that a piece of tan-bark dropped into the coffee pot would add nothing desirable or pleasant to the flavor of the coffee, so the removal of the chaff clearly makes a corresponding improvement.

Barrington Hall Steel-Cut Coffee – is a superior blend of coffee with the tannin-bearing chaff and dust removed, so that a pound of “barrington hall is equal in strength and flavor to a pound and a half of the same coffee ground in the ordinary way. Grocers sell it in one and two-pound canisters. They are air-tight and the blend improves with the keeping. BAKER & CO., COFFEE IMPORTER.

Kamo Coffee Advertisement – 1905 – In presenting the “KAMO” brand of Mocha and Java to lovers of good coffee, we desire to call particular attention to it CUP QUALITY. Nothing but the finest coffee are selected, end they are roasted direct in the flame in the most perfect machine that science and ingenuity can produce; thereby retaining the delicate aroma and producing the richness of a perfect drink. Packed in 1 lb. air tight cans only. Imported and roasted by PAXTON & GALLAGHER CO.

The first advertisements for decaffeinated coffee – The brand name was Kaffee Hag and was developed in 1906 in Bremen, Germany. The name was later marketed as Sanka decaf which is familiar to people today. 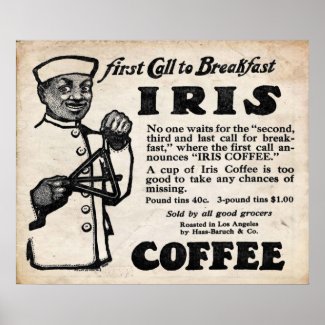